Is my will to invest about to beat inflation?

Passively or actively, we have all been actors in the latest chapter of the financial markets’ rise to the top. During the unfaltering rise, we listened to news and opinions about doom and glory, and as humans, we always prefer the sweetness of the sound of a champagne bottle opening – boom times. We ask you – is bullishness enough to disregard economic history and create a new financial market boom? In this article, we are going to discuss the two main factors driving the current economic conditions – inflation and interest rates, and how their interaction has shaped the economic outlook and the financial markets in the past. We will attempt to answer our question and understand both expected and unexpected effects in the near future.

First, let us review some of the mechanisms in the economy to later understand better their effect in historic cases, and assist us then in gathering some conclusions about today’s situation. Most of us understand the effects of inflation on companies (if not, we encourage you to read our release on December 26), so it’s no coincidence that the Federal Reserve (FED) has now made tackling inflation a recent priority. For this purpose, the FED has a few tools at its disposal to add or remove liquidity, used in accordance with our position in the economic cycle. We will discuss the tools and their impacts.

The most widely understood Fed tool is what we will call the ‘federal funds rate1 tool’, but the FED has made significant use of its balance sheet to buy or sell securities too. These tools help shape the US Treasury yield curve2, which serves as a reference for the rate definition of institutions’ fixed-income products (e.g., mortgages, bank loans) and consequently mostly defines the amount of money available in the economy. So, when the FED’s mandate is to reduce inflation, it increases such interest rates (in addition to other tools) to remove liquidity from the economy which reduces demand; when the FED needs to give a boost to the economy, in time of crisis or economic slowdown, the opposite happens. This is rather a simplistic explanation, but sufficient for our discussion.

During the last few months, the economy has experienced a historic increase in the inflation rate. Moreover, an inversion3 in the Treasury yield curve between the 2-year and 10-year Treasury bond yields materialized last week. How might these forces affect financial markets? Let’s dig into the history of these two measures to determine the impact on the S&P 500 – which will be our market representation – to reach some conclusions on what to expect during the coming months.

To find such a record rise in inflation, we will have to review the early 1970s. In 1973, the constraints on US industrial production and the oil crisis caused by the oil embargo from the Arab OPEC countries shot inflation rates to the roof. Inflation kept rising until its local peak at the end of 1974. Inflation hit 12.3% almost exactly when the S&P 500 bottomed – a drop of 47.5% since its peak in January 1973. Since the beginning of 1973, the FED increased its interest rate by around 350 points in 9 months and kept it mostly at that level for 15 months, regardless of the continued rise in inflation.  The problem seemed to subside three years later, dropping the inflation rate to 6 % and recovering most of the losses in the S&P 500 until April 1976. The following graph can help us follow these events. 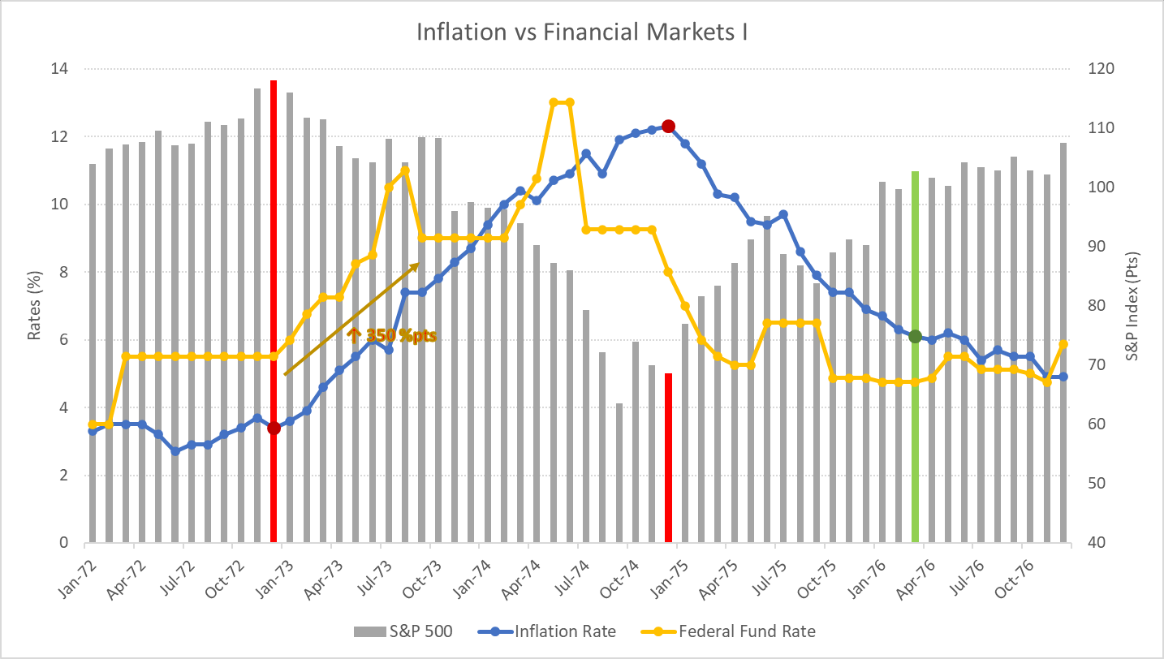 Nevertheless, the problem was solved temporarily and the sudden decrease in interest rates to combat the high short-term unemployment was too accommodative. With the shock in oil prices caused by a nearly 7% drop in global production due to the Iranian Revolution in January 1979, inflation hit 14.7%, causing the S&P 500 to remain flat for a period of four years. Seeing the aggravation of the issue, Jimmy Carter’s administration designated a new chairman, Paul Volcker, in August 1979. He and the FED Committee (FOMC) made tackling inflation a top priority, hiking rates from 11% to 19% over two years. This caused inflation to retreat below 4%; while the S&P 500 started to pick up momentum. Although the FED’s resolve effectively decreased inflation, the monetary contraction drove the economy into a severe recession. The following graph represents these events. 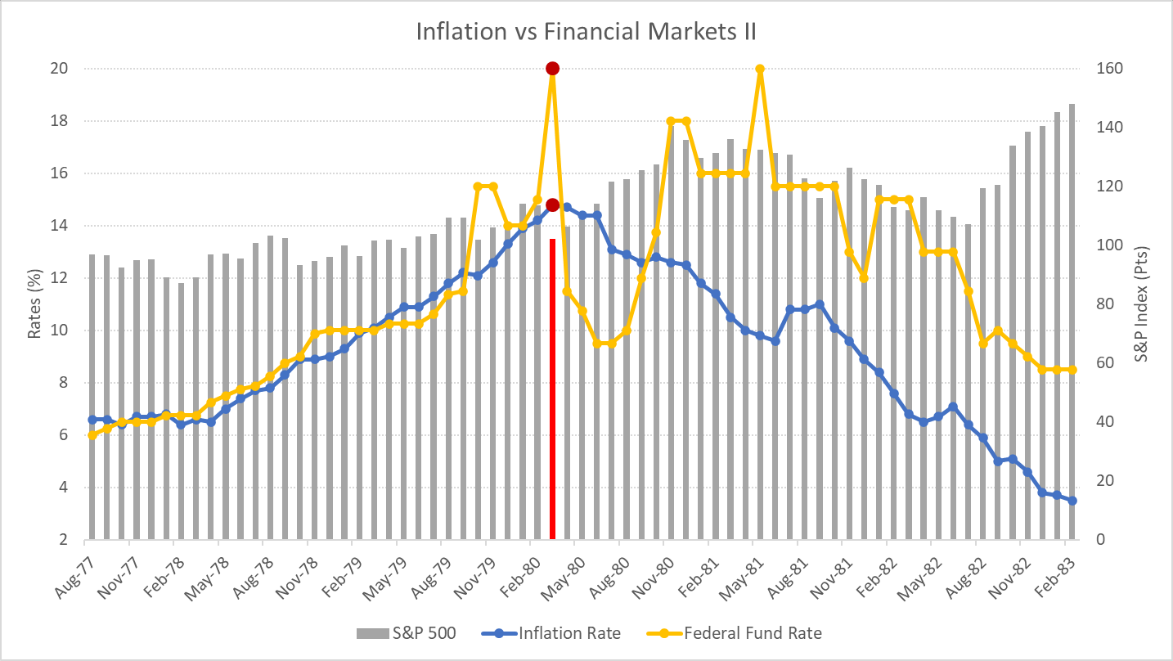 With inflation controlled, the S&P 500 entered a growth period, and other factors dominated the cycles. Like today, an inversion of the Treasury yield curve was present in the period described above, but what has happened when yield curves have inverted in times of low inflation? In the following decades, we saw that inversions of the yield curve remained a good indicator of economic slowdown and recession4 in most cases, which affected returns on the financial markets. The inversions in 1989-1990, 2000, 2006-2007, and 2019 coincided with significant drops or long periods of meager returns for the S&P 500. We note the following patterns.

Therefore, these periods had to be followed by monetary measures from the FED and fiscal incentives from the government to perk the economy.

This takes us to today’s events. After a record injection of liquidity from the FED by lowering interest rates to zero and increasing its balance sheet to control the far end of the yield curve and a push from the US government of the three helpings of fiscal stimulus that supported consumers during the shutdown of the economy during the pandemic, inflation hit highs not seen since the 1970s. Similar to those days, we have sticky inflation due to a constrained industrial output result of the current global supply chain issues and a commodities shock product of the Russian war in Ukraine.

We also see similarities in the hesitancy of the FED in administering tight monetary policy that might overturn the labor market, which is also part of the FED’s mandate. Nevertheless, the lack of action by our current FED (and the Fed of the 70’s) has reasserted the problem and the need for a harsher reaction. ‘Behind the curve’ in the 70’s, the subsequent necessary FED hawkishness triggered a sudden, large increase in interest rates, first in the backend of the yield curve and then in the short end. We are seeing this again today. Removing liquidity from the market at a faster pace results in a steeper drop in demand and an increase in the likelihood of a recession, demonstrated by an inverted yield curve.

So, what can we extrapolate from the past into the future? We have two primary assessments. First, inflation has to be tackled, and the longer the FED takes to tackle inflation, the deeper the measures and effect on the economy that the corrections have. Second, we have listened over and over from many financial commentators that the flattening or inversion of the Treasury yield curve by itself does not mean an imminent recession – arguably in reverence to the cases above. Nevertheless, accompanied by inflation, yield curve inversions evidently result in a deterioration of the economic dynamics (i.e., demand, earnings, purchasing power, etc.) and a flat or negative outcome for financial markets in the coming months or years.

How should we move forward with our investments then? The strategy we use in an increasingly liquid economy is different from the strategy in an increasingly illiquid economy. We believe the best-case scenario is a flat S&P 500 for potentially years, as we concluded from reviewing the history of the relationships among inflation, interest rates, and returns in the S&P 500 and comparing it to our current scenario. In my opinion, it is time to listen more to the data and less to our desires; not because a bull can crush a few hurdles, but that it could also run directly into a cement wall. So harsh times certainly open new opportunities; however, we need to be receptive to strategies designed to remove the systematic risk present today or be selective on the positions that add adjusted returns to our portfolios in this circumstance. The main idea of investing is to buy productive assets for increasing wealth, commonly defined as purchasing power. There is no better way to do it than to understand the fundamentals of assets that we own, with returns measured against the yardstick of inflation.

1 The term federal funds rate refers to the target interest rate set by the Federal Open Market Committee (FOMC). This target is the rate at which the fed suggests commercial banks borrow and lend their excess reserves to each other overnight.*

3 An inverted yield curve describes the unusual drop of yields on longer-term debt below yields on short-term debt of the same credit quality.* A negatively sloped – inverted – yield curve implies that investors expect interest rates to be lower in the future. This, in turn, implies that investment returns generally will be lower in the future. Lower returns lead to a decrease in investments that is associated with economic stagnation and deflation.**

4 A recession is a macroeconomic term that refers to a significant decline in general economic activity in a designated region. It had been typically recognized as two consecutive quarters of economic decline, as reflected by GDP in conjunction with monthly indicators such as a rise in unemployment.